Eleanor Merritt was a native New Yorker, an honors graduate of the illustrious High School of Music and Art; she received her B.A. and M.A. degrees in Fine Arts from Brooklyn College CUNY. Her work was influenced by the training she received from notable professors at Brooklyn College, including Mark Rothko, Ad Reinhardt, James Ernst, Kurt Seligmann, and Mark Dillion.

Eleanor Merritt’s work spans the U.S. and internationally. Her work occupied a variety of art spaces, including museums, galleries, universities, and business centers, where it is widely acknowledged and revered. Included on the list are the University of Florida, the University of Connecticut, American International College, the Atlanta Life Insurance Company, the Carnegie Endowment Institute in NYC, the Contemporary Art Museum in Jacksonville, Florida, the Polk Museum in Lakeland as well as a recent acquisition by Florida’s state Ringling Museum in Sarasota Florida. She had over 25 one-woman shows and two 60- year retrospectives, and her works had traveled to California, Colorado, Texas, the U.K., and Shimonoseki, Japan.

Merritt was a nationally renowned and service-oriented leader in the arts community. Eleanor served on the Arts council board as president of the Venice Art Center and was the first Black female Trustee at the John and Mabel Ringling Museum of Art. As a retired chairperson of the art department in the Westbury NY school system, she used her teaching and administrative skills through her community work in Sarasota, Florida, and continued teaching at various lifelong learning institutions and national arts community lectures.  Moreover, she was also a charter member of the National Museum of the Women in the Arts in Washington, D.C. She also devoted years of her expertise as a member of the Florida Artist Group, Women Contemporary Painters, Petticoat Painters, and Sarasota’s Art Uptown artists collective.

” Selected works from the last 60 years have been included in this exhibition to mark the transitions which have taken place in my work and in my life. Although my imagery is mainly figurative, the concepts behind the visual statement deal with very personal expressions. Actually, this exhibition is a sum total of a 60-year journey as a woman of color who is also an artist. “

” The most important turning point for me in terms of style and technique came when I changed from painting in oils, then to acrylics, and then moved to water-based media. I have found in that transition the freedom of working with color and the ability to achieve greater fluidity in line and brush. The use of collage and mixed-media techniques has opened and expanded my vision to perhaps a more abstract image, but certainly, one which I still feel is strongly expressive of who I am as an artist. “ 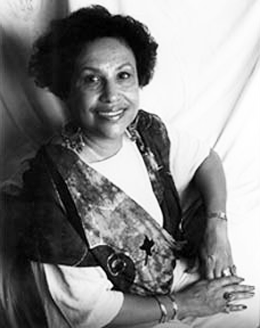 Fine artist Eleanor Merritt Darlington passed away peacefully in her home on Wednesday, January 16, after a long battle with lung cancer. She was 85. Born in Harlem, NYC, she was the youngest of five children born to Jamaican immigrants. She attended the High School of Music and Art and graduated in 1951. She continued her studies at Brooklyn College, where she learned from luminaries such as Ad Reinhardt, Mark Rothko, and James Ernst. She received her B.A. in Art in 1955 and her M.A. in Fine Arts and Education in 1958. Merritt was the first African-American art teacher and department chair in the Nassau County district. Eleanor was involved in the greater arts community and its administration. She served as chairman of the Public Art Committee and on the board of the Arts & Cultural Alliance of Sarasota County. She also served Women’s Caucus for Art; National Museum of Women in the Arts, was Board Emeritus Member of John & Mabel Ringling Museum of Art; Docent for 25 years at the Ringling Museum, board member and former President of the Venice Art Center; Arts Council board member; chair of the Art in Public Places Program; board member of Art Center, Sarasota. She was a long-standing member of the Florida Artists Group and Petticoat Painters. Ms. Merritt founded and was a member of Women Contemporary Artists. Among her many awards, Eleanor was honored by The Ringling Foundation in 2017. The Sarasota-Manatee Chapter of the National Council of Jewish Women recognized her as one of their 2015 Women In Power honorees. Merritt has exhibited in group and solo shows throughout her career. In February 2017, the Arts & Cultural Alliance of Sarasota County hosted a retrospective exhibition of Merritt’s work, entitled Sixty Years of Painting, 1957–2017. Read more about the exhibit at Broadway World. A one-woman show, Revelations of Goddesses, was displayed from 2014 – 2015 at the Houston Museum of African American Culture in Houston, Texas. Read more about the exhibit at The Houstonian. She was married to Lorenzo Merritt from 1954 – 1976, and to Chris Darlington from 1980 to his passing in 2017. She was survived by her sister, Mrs. Pauline Butler, of Tucson, AZ, two daughters, Ms. Lori Merritt and Dr. Lisa Merritt, granddaughter and emerging artist Amara Merritt, as well as a host of nieces, nephews, and friends. Ms. Merritt believed that “…Art can open a window in time – it speaks to the heritage of the past, but carries these traditions into the future” as we will carry Eleanor’s memory. The Passing of a Painter: Eleanor Merritt By Philip Lederer, SRQ Magazine Ms. Merritt’s Obituary, Legacy.com.

"I have always used figurative references in my work. Over time these images have become more abstract and the painted surface very textural. My paintings have symbolic and/or personal revelations as to my point of view. The viewer must look at the artwork as images not based on reality but on pure imagination. My style continues to evolve with persistent exploration. As an artist, this journey has been one of constant experimentation and renewal of my creative force with each image I create."

In Memorium We observe the anniversary of Ellie’s passing with a few moments in time to remember her effervescent Spirit, beautiful smile and amazing body of artwork. 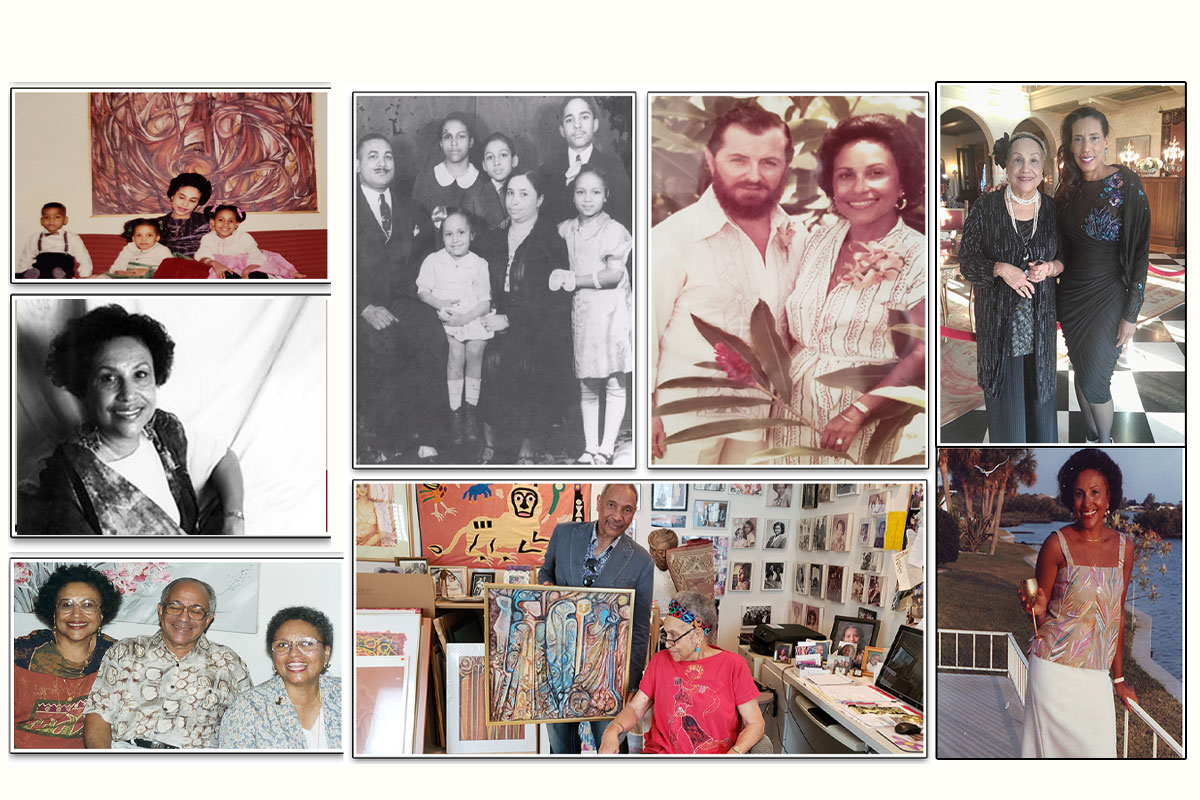 In honor of former board member Eleanor Merritt, a special fund was created to attract and assist artists of color to join the Florida Artists Group. 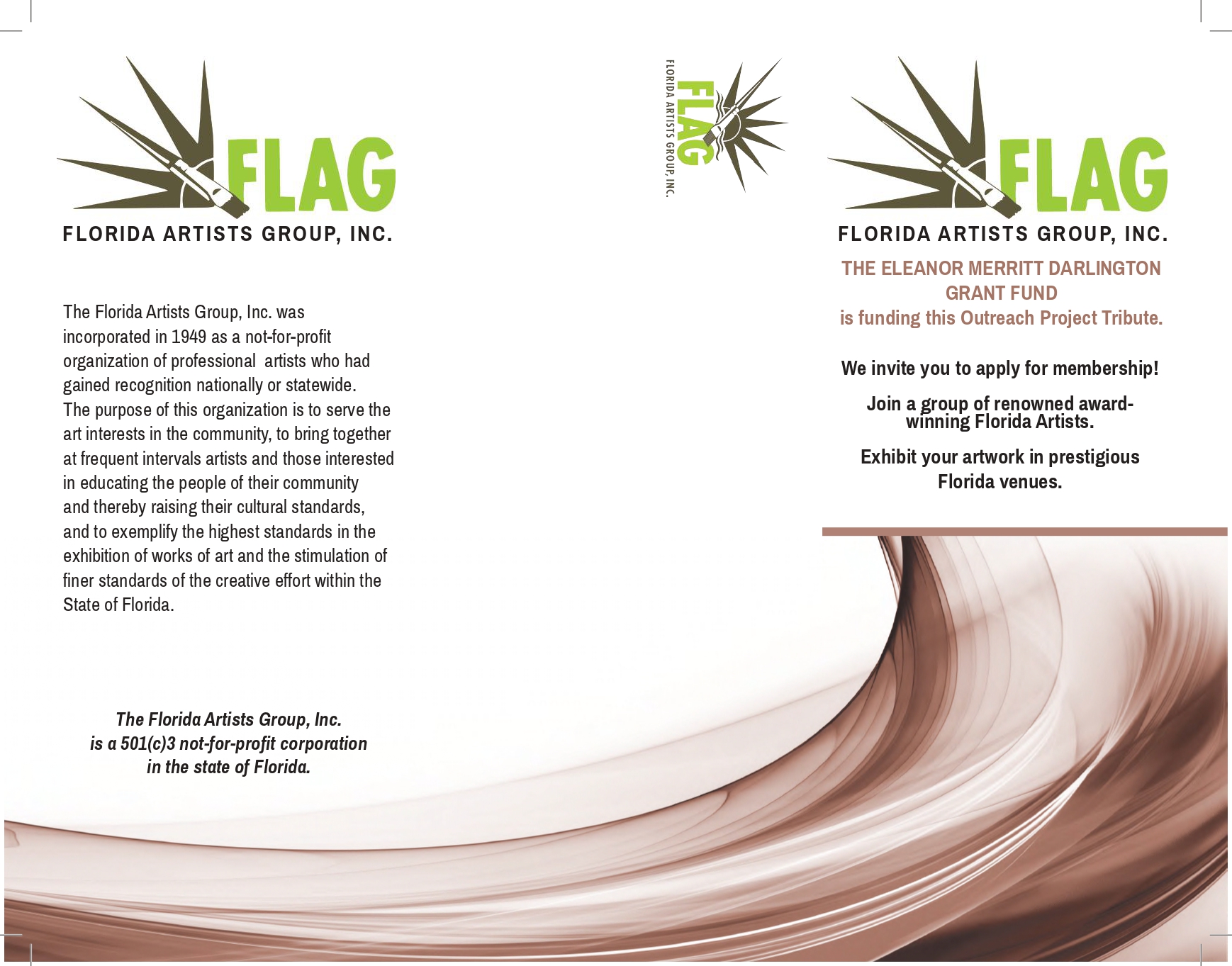 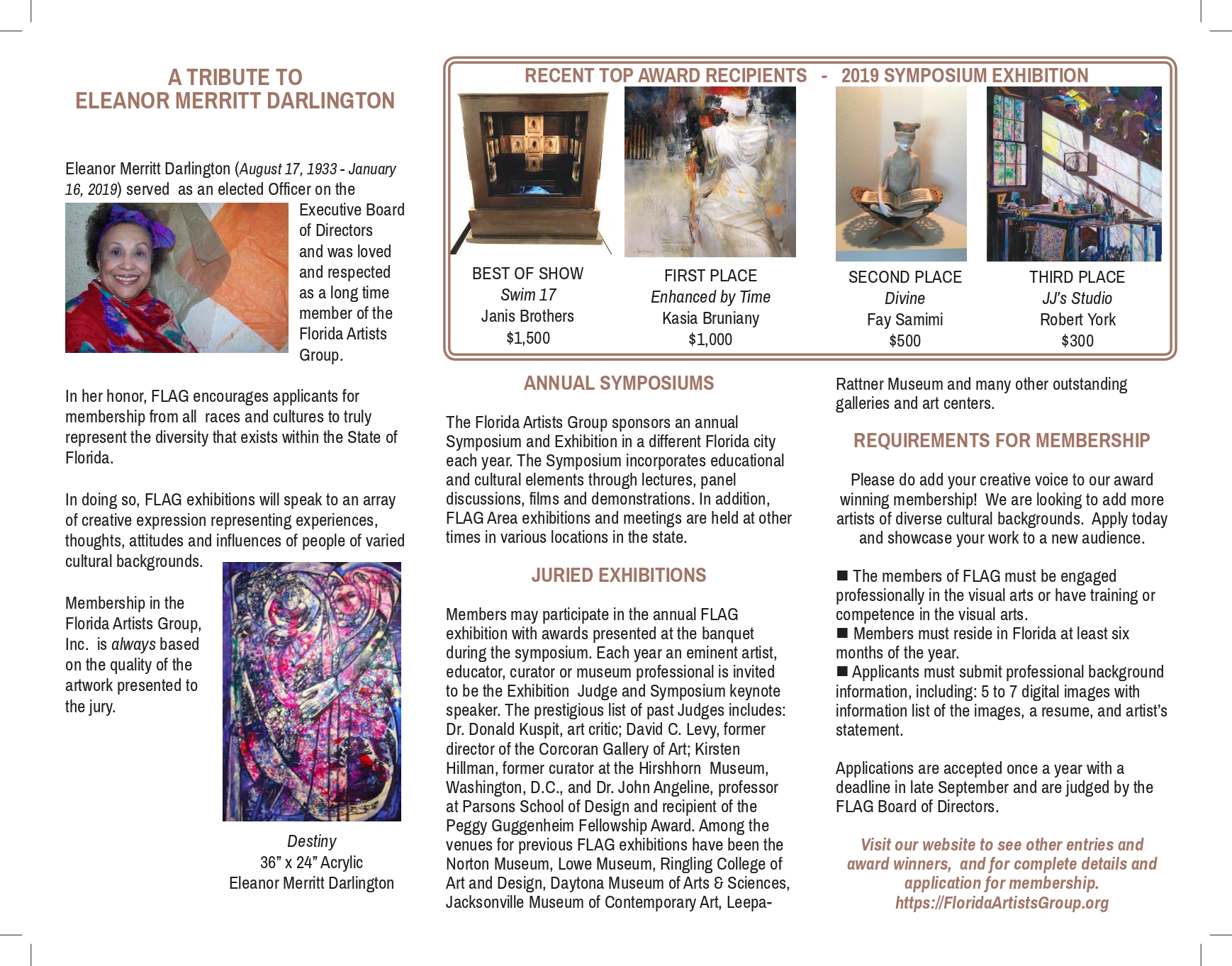 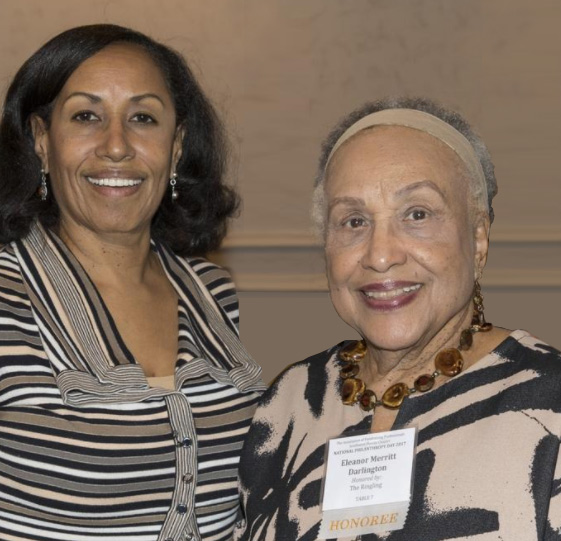 Eleanor was honored by The Ringling foundation at The Association of Fundraising Professionals National Philanthropy Day Luncheon at Michael's on East, Tuesday November, 14, 2017. The group's mission Is to advance philanthropy by enabling people and organizations to practice ethical and effective fundraising.

Selected works from the last 60 years have been included in this exhibition, to mark the transitions which have taken place in my work and in my life. Although my imagery is mainly figurative, the concepts behind the visual statement deal with very personal expressions. Actually, this exhibition is a sum total of a 60-year journey as a woman of color who is also an artist.

The most important turning point for me in terms of style and technique came when I changed from painting in oils, then to acrylics, and then moved to water-based media. I have found in that transition the freedom of working with color and the ability to achieve greater fluidity in line and brush. The use of collage and mixed-media techniques has opened and expanded my vision to perhaps a more abstract image, but certainly, one which I still feel is strongly expressive of who I am as an artist."

To read more about this show, please visit:

Several works were purchased during the showing. 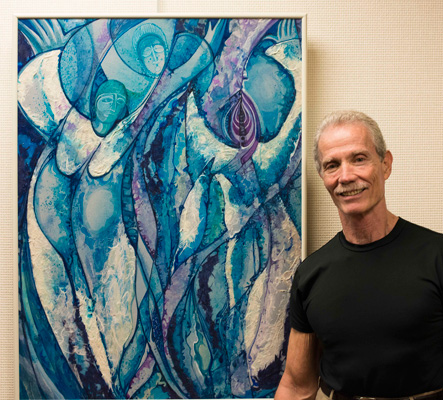 Ira Kasdan was gifted Ancestral Dream Dance for his birthday by his wife, Victoria. 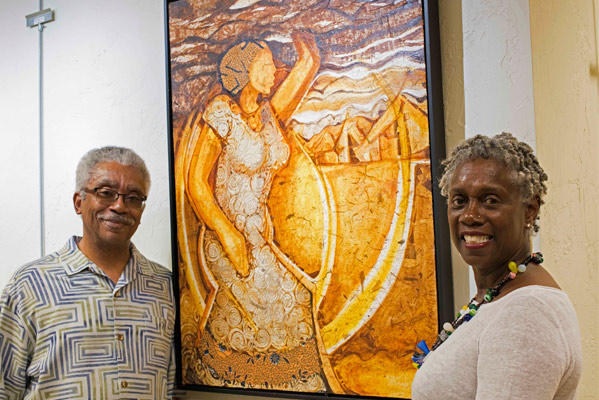 Carrying Firewood was chosen by James and Caryl to complement their extensive art collection. 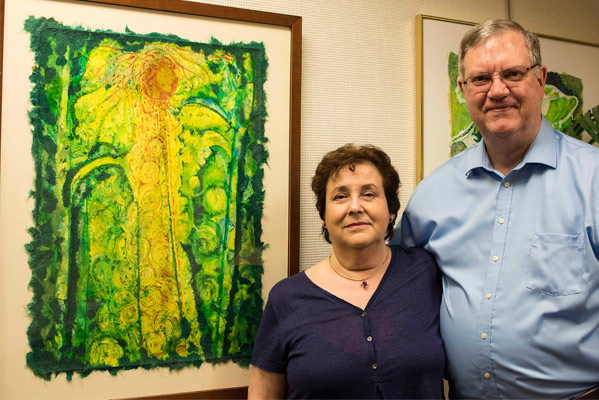 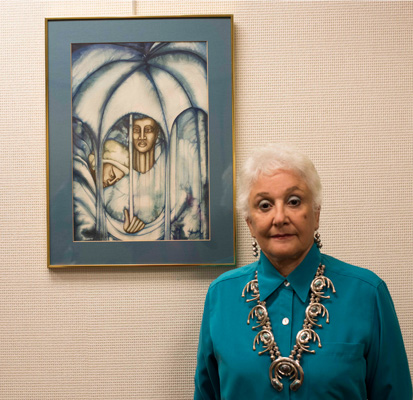 Tears in the Rain is now owned by Pat Chatard.

The Retrospective Artists Reception took place on February 9, 2017, and was thoroughly enjoyed by all. 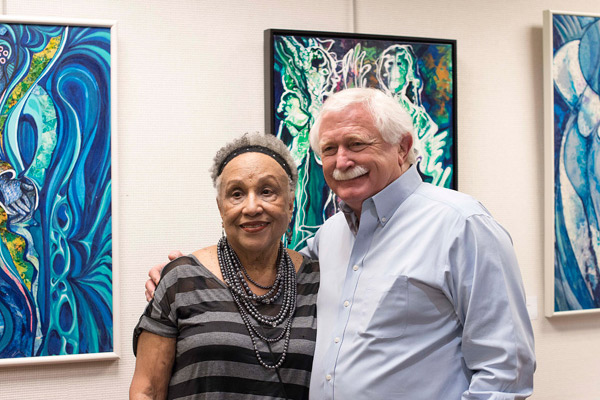 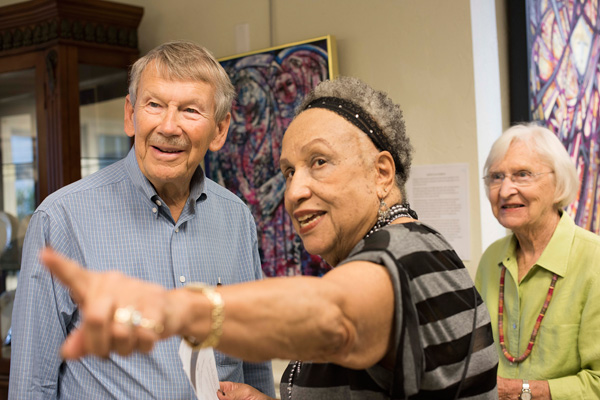 Ms. Merritt describes her work JAMIE AND ME. 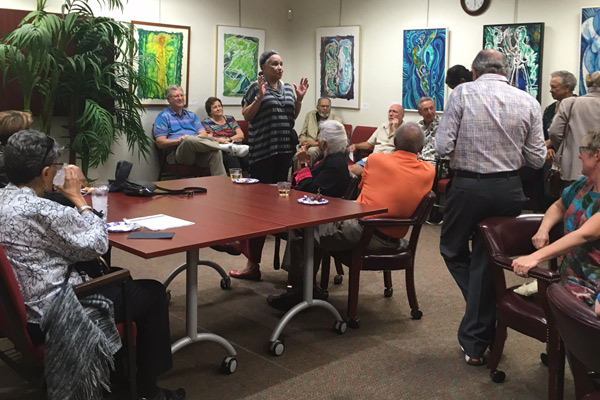 In her opening statement, the artist describes her career and the evolution of her work over 60 years. 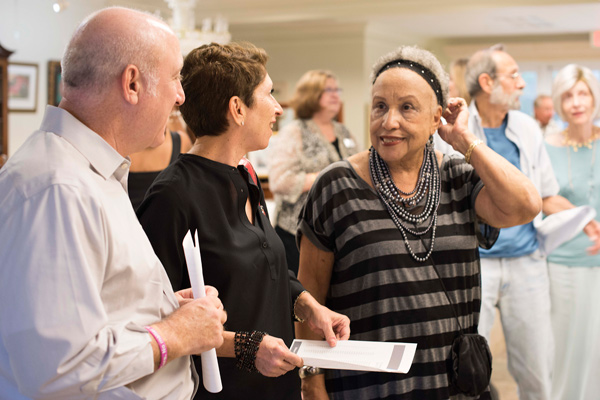 We had a great turnout of both old friends and new! 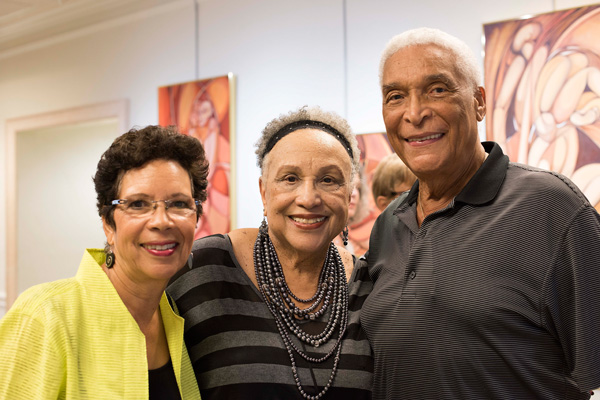 Harriett and Clarence congratulate Ms. Merritt on the retrospective show. 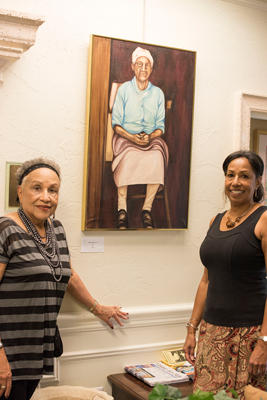 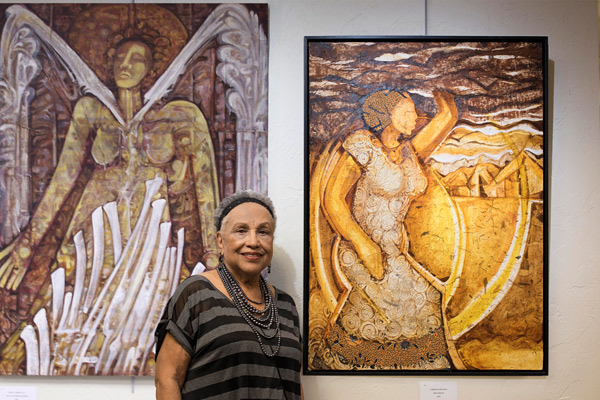 The artist, with her works ANGEL OF MERCY - 911 (left) and CARRYING FIREWOOD (right).

This exhibition shines a bright light on the spectrum of African-American artistic practices from the early 20th century to the present day. We invite you to explore the stylistic evolutions powerfully expressed in the works of these 23 African-American artists. Including vibrant paintings, quilts, prints, sculptures, and drawings, this exhibition is a unique opportunity to view historical reflections and contributions of cultural importance.

Ringling College of Art and Design is grateful to partner with the ACA Galleries in bringing these exceptional works to Sarasota.  We would also like to thank Mr. Warren R. and Marie E. Colbert, Mrs. Carol Camiener, and Dr. Lisa Merritt for the generous loan of artworks for this exhibition.  Special thanks to Melanie S. Thomas, Greatness Beyond Measure, Newtown Alive, Sarasota African American Cultural Coalition, and Marie Selby Botanical Gardens for their support and partnership.

Sponsored by The Community Foundation of Sarasota County, SRQ Media Group, Home Resource, and by NPR Radio Stations WUSF 89.7 and WGCU Admission to this exhibition and all events are FREE and open to the public.

This is one of the many interviews where Eleanor Merritt has talked about her career and artworks. She was a passionate painter who had put out her works in universities, corporate offices, museums, galleries, libraries, and art centers. 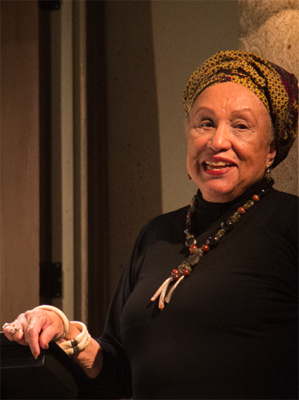 Photos courtesy of Don Daly Photo.
On February 8, 2016, WBTT (the only professional black theater company on Florida’s West Coast) presented a fundraising program that focused on the Florida Highwaymen, a group of 26 African-American artists who – from the early 1950s through the 1980s – painted beautiful landscapes of undeveloped, serene Florida landscape. The artists sold their paintings door-to-door to businesses and individuals throughout Florida because gallery owners in the segregated South wouldn’t show their work.

The evening included a reception to meet artists and view the artwork. There was a panel discussion with the artists and longtime collector Larry Helmuth which was moderated by Eleanor Merritt Darlington. Highwayman Al Black also presented a painting demonstration.

Please join us for the Artists Reception, Thursday, Jan. 28, 5 to 7 p.m. at Art Center, Sarasota Exhibition runs January 28 through March 2016 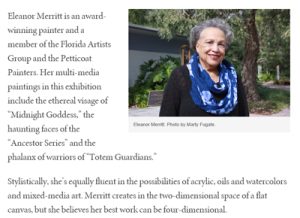 Ms. Merritt is pictured outside Art Center Sarasota.
Story and photo by Marty Fugate, for yourobserver.com 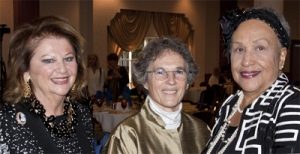 Women In Power Honorees(from left) Renee Hamad, President of the Women’s Resource Center of Sarasota County, Wendy Surkis, President of the Sarasota Museum of Art/SMOA, and Eleanor Merritt.
The 33rd Annual Women in Power Luncheon was held on January 21 at Michael’s on East. The annual event honors women whose accomplishments mirror NCJW’s focus on social justice by improving the lives of women, children and families and by safeguarding individual rights and freedoms. Read more at the NCJW website.
From the Archive...
error: Content is protected !!